What Is a Chord Progression?

By learning chord progressions you will

What is a chord progression? 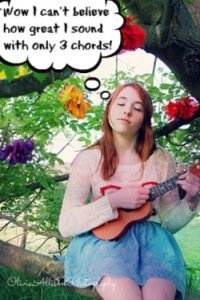 According to Wikipedia, a chord progression ‘is a series of musical chords that “aims for a definite goal” of establishing (or contradicting) a tonality founded on a key, root or tonic chord and that is based upon a succession of root relationships.’

So what on earth does that mean? (We’re going to get pretty technical here for those who are interested.  If you’re NOT one of those folks, go ahead and skip to the next section. You can benefit from practicing chord progressions even if you’re not so sure exactly what they are.)

The Key and Home Chord

To understand chord progressions, we first have to understand what the ‘key’ of a song is, and what a ‘home chord’ is.

All tonal music, including most songs you would play on the ukulele, has a ‘key’. Not an intricately cut piece of metal that opens a door, this kind of ‘key’ is also known as a ‘key signature’. Each key signature defines a specific scale.  There are many flavors of scales, but most ukulele songs are written in major or minor scales.

When we say that a song is in the key of C major, we mean that most if not all of the notes of the song’s melody are members of the scale of C major.  Saying a song is on the scale or key of C major also means that the music has been composed so that the note C will be heard as the most important note. The home note, also known as the ‘tonic’ of a scale or key is the center pitch where all the other notes in the melody are based.

The home chord is often the chord that starts a harmonic sequence (chord progression). Most songs visit many other chords before they return to the home chord at the end. And the music is arranged in such a way that the home chord is the most prominent stable chord.

A chord progression, therefore, is a series of chords that lead the listener towards the home chord of the key.

There is an almost infinite number of ways in which chords can be put together to produce a pleasing, logical musical flow. Let’s take a look at the most common chord progressions. Learning these will help you learn and understand songs more easily and quickly.

The simplest chord progression is a two-chord progression V7, I. We show below a common form of this sequence on ukulele. Notice how the first chord, the one with the number 7, is always five letters after the home chord in the musical alphabet. In music theory language, we say that the root (name note) of the first chord is a 5th above the root of the second chord. 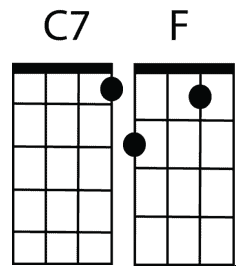 Many songs that use only two chords use this progression. Here is a list of some of these songs:

You can practice these songs in many different keys to get used to this two-chord progression. We’ve included 10 extra two-chord songs in the latest print edition of 21 Songs in 6 Days: Learn Ukulele the Easy Way. Here are some examples of this same progression V7, I progression transposed to a different key (home chord). 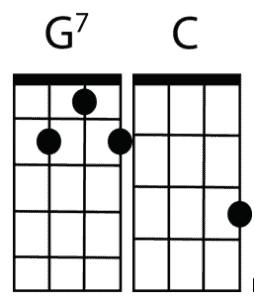 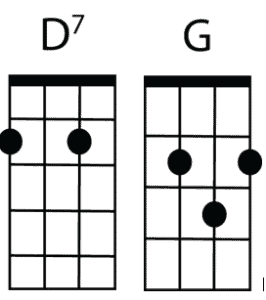 “Three chords, and the truth

All I’ve got is a red guitar

— Bono, freestyling during a cover of Bob Dylan’s All Along the Watchtower

“Three chords and the truth, that’s what a country song is.”

The most common chord progression you will see is called the IV, V7, I progression. Thousands of songs use this chord progression. We show below the simplest ukulele version. We’ve repeated the graphics of the music alphabet so you can see the relationships between the chord roots. This chord progression can also be practiced in different keys (homes). Here are some examples of various forms of this progression: 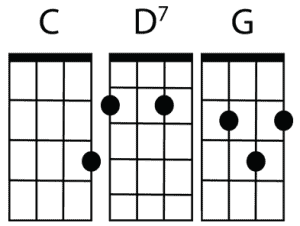 Another often used progression is I, VI, IV, V7. Jenny has created a video of many popular four-chord songs. You can watch this video below to get an idea of all the songs you will be able to play using this chord progression.

On the ukulele, the easiest version of this four-chord progression is: 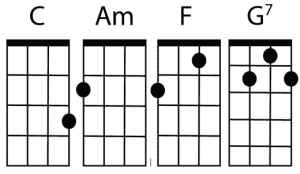 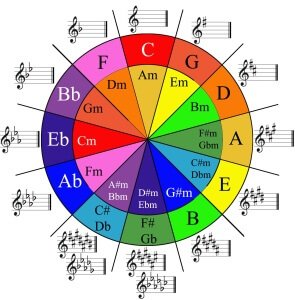 Besides showing how many sharps or flats are in a key signature, the circle of 5ths often guides chord progressions.

Many songs from the 1920’s and jazz standards like Ain’t She Sweet, Five Foot Two and All the Things You Are use this progression. Here it is in ukulele terms:

With regular practice, you will be able to arrange chords to make your music have a feeling of movement and direction. You’ll have a critical skill for improvising and composing your own music.

Have fun and happy strumming!

Songs in Minor Keys Fit the Mood of a Gloomy Day

How to Convert Guitar to Ukulele Chords