Before viewing the video on how to play Arirang on ukulele, download the lyrics and chords sheet here. Then you can easily follow the ukulele tutorial. 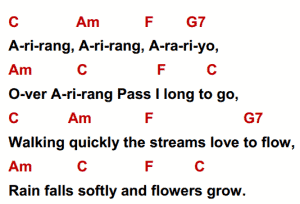 We here at ukulele.io present you a tutorial on how to play Arirang on ukulele. We think it’s pretty easy to learn for two reasons. First, the song uses just four chords: C, Am, F and G7. Second, the strum is a simple down-down-down flow with three strums per measure.

There is also a part in the middle where you get to play the melody. Jenny illustrates this fingerpicking method in the video. To get a copy of the tab sheet, please purchase our new book, Ukulele for All.

Arirang is a famous and revered Korean folk song. In fact, UNESCO has inscribed it on their Intangible Cultural Heritage (ICH) list, first in 2012 then again in 2014.

Although the song is known to be first recorded in 1896, it is said to be around for more than six centuries. An American ethnologist named Alice Fletcher made the 1896 recording of three Korean students while they were singing the song at her home.

A SONG THAT LAUNCHED A THOUSAND VARIATIONS

While many consider Arirang a simple song  – the song having just a few lines and an easy melody – it undoubtedly inspires creativeness and replication that it is believed to have more than 60 versions. Additionally, these 60 versions have their own different variations that in total add up to more than 3,600 variations.

Koreans, whether from the South or from the north, universally love this immortal song. Many regions have their own variations, each one improvising new lyrics to incorporate their local culture.

The different versions of Arirang are usually named after the place they originated. The Jeongseon Arirang is widely accepted as the original version which originated from Jeongseon town in Gangwon province. However, the most commonly known version is the Bonjo Arirang which was made popular by a 1926 film also entitled Arirang. There are many other popular regional versions such as the Jindo Arirang and Miryang Arirang.

A SONG THAT UNITES A DIVIDED NATION

Since the Korean War in 1953, Korea is still a nation divided but the song Arirang is well-loved in both countries. Both North Korea and South Korea successfully submitted the song to UNESCO’s ICH list. The former submitted in 2012 and the latter in 2014.

In the 2018 Winter Olympics, athletes for both countries marched together to the tune of Arirang. As such, many refer to it as a melody that unites a divided nation. In addition, an 80-year old Korean named Kim Nam-ki sang Jeongseon Arirang during the opening ceremony. The message of peace and harmony that the Olympics hopes to deliver is also embodied in Arirang.

Arirang is one of the songs in our book “Ukulele for All.”