Halloween is just around the corner and we thought we’d bring you a somewhat spooky but fun novelty song with The Cat Came Back beginner ukulele tutorial. Because the chord progression is the same throughout the song, it makes for an easy ukulele song. Additionally, the song lyrics are humorous and quite entertaining to sing.

The Cat Came Back ukulele tutorial is perfect for beginners as it plays the same four chords throughout the song: Am, G, F and E7. Although most people usually play the song in the key of E minor, Jenny transposed it to the key of A minor to make it easier to sing and play. On the other hand, the chords are A, G, F and E for the ukulele bass. And you play that descending bass line repeatedly through the whole song.

Don’t forget to visit us here to subscribe to weekly copies of sheet music. If we’ve featured a song from previous weeks that you like and you want a copy of the music sheets for that song, you can also contact us.

So, here’s The Cat Came Back beginner ukulele tutorial:

Because Jenny sings and strums the song in the regular ukulele then adds a ukulele bass sound to it, the team added a new feature to the video: a split-screen. The ukulele bass is a relatively new addition to the ukulele family. And Jenny is having fun experimenting with the instrument. Since the instrument looks like a ukulele, it’s been included with the ukulele family. But its pitches are actually same as an upright acoustic bass and so is tuned in the same way. 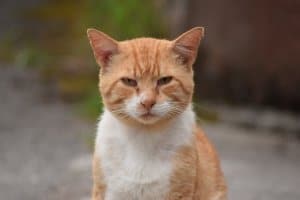 American composer Harry S. Miller wrote the humorous and catchy song The Cat Came Back in 1893. It’s been around for more than a century. Consequently, numerous recordings have been made of it which included several variations in the lyrics. Furthermore, its popularity also reached many other countries. For instance, renowned Canadian children’s entertainer Fred Penner used parts of the song in a medley, Australian folk singer Alex hood recorded his own rendition and there’s also an Afrikaans version.

The song tells a silly and funny story about an old man who was trying very hard to lose his yellow cat in many ingenious ways but as the song goes, “the cat came back the very next day”. The plot is comical and interesting that an animated film based from it and held the same title was released in 1988.