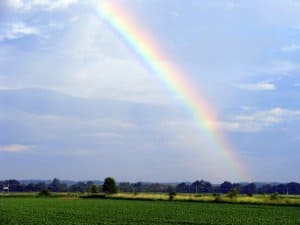 The decision to record a cover of Somewhere Over the Rainbow was said to be a last-minute decision by Israel Kamakawiwoʻole’ (Iz or Izzy) and his producer Jon de Mello. But what a great decision it was! Iz’s version of Somewhere Over the Rainbow/What a Wonderful World holds the distinction of being the longest-leading number one hit on any of the Billboard song charts, having spent 185 weeks at number one on the publication’s World Digital Songs chart.

Somewhere Over the Rainbow Video Tutorial

Here’s Jenny’s lesson on how to play Over The Rainbow  as covered by Israel Kamakawiwo’ole.

The Hawaii state flag flew at half-staff on July 10, 1997, the day of Kamakawiwoʻole’s funeral. His coffin lay in state at the state capitol building in Honolulu. He was the third person in Hawaiian history to be awarded this honor, and the only one who was not a government official. Approximately ten thousand people attended the funeral. Thousands of fans gathered as his ashes were scattered into the Pacific Ocean at Mākua Beach on July 12, 1997. Scenes from the funeral and scattering of Kamakawiwoʻole’s ashes were featured in official music videos of “Over the Rainbow” released posthumously by Mountain Apple Company; as of July 2015, the two videos as featured on YouTube have collectively received over 198 million views.

Because of his skillful ukulele playing and incorporation of other genres, such as jazz and reggae, Kamakawiwoʻole remains a very strong influence on Hawaiian music.

Is the strumming pattern confusing?

Not sure how to read tab?  Want to get started playing melodies on your ukulele?  Then, sign up for our FREE STUFF here to get a FREE 7 video course on how to read tabs.

When you’re ready, our new book Easy Ukulele Songs: Five with Five Chords  will take you further into the wonderful world of tab and fingerpicking melodies.  It’s available as an ebook or a print book on Amazon. So, you’re pretty good at 3-chord songs now. You can do simple strumming patterns. You may even know some other chords. You’d like to take your playing to the next level.

Where do you go from here?

Get your Book now

Why We Use Public Domain Songs