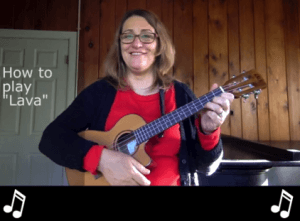 Lava easy ukulele tutorial is intended for ukulele beginners. If you’re new to ukulele, Lava is a great song to learn because it only uses three chords, C, F and G7. James Ford Murphy says his song was inspired by Israel Kamakawiwo’ole’s version of Somewhere Over the Rainbow. And in fact, he used the same strumming pattern.  So learning to play Lava will help you get ready to take on Over the Rainbow. Because Over the Rainbow has more chords and harder chord shapes, it’s a bit harder to learn.

You can watch the Lava video tutorial below. Firstly, click here to download lyrics and chords for Lava.

Director James Ford Murphy and producer Andrea Warren premiered the computer-animated musical short film Lava at the Hiroshima International Animation Festival on June 14, 2014. Subsequently, Pixar Animation Studios released the short film to theaters on June 19, 2015 alongside another computer-animated film Inside Out. The soundtrack of the film, also titled Lava, was released on June 16, 2015.

The short film is a musical love story that takes place over millions of years. Murphy says Lava was inspired by the “isolated beauty of tropical islands and the explosive allure of ocean volcanoes.” He learned to play the ukulele and began writing a song. He pitched the idea to Pixar head John Lasseter — musically. “I was terrified, but I just went in and let rip,” he says. “You’ve got to just throw yourself into it.” In short, Lasseter loved the pitch and green lit the project.

“To generate stories I think about things I can geek out over, things that really touch me,” says Murphy, who’s been at Pixar for 19 years. Murphy fell in love with Hawaii after visiting on his honeymoon. “Hawaii really touches me. The geology, the people, the amount of music that has come out of this remote island in the middle of the Pacific Ocean — it just blows me away,” he says. “The fact that there are still active volcanoes in this place, the fact that there’s a whole chain of islands that has sunk back into the sea… it just became this fascination.”

Anyway, if you are fascinated by volcanoes, Hawaii, and love stories, you’ll lava playing Lava!