What is a capo? 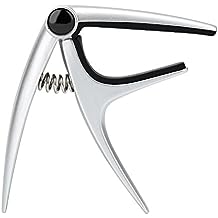 It’s a rubber-covered bar that clamps to your ukulele’s neck and holds down the strings. The capo shortens the strings’ playable length which means their pitches sound higher. Ukulele capos are especially suited to be used with the ukulele.

Use a capo (short for capotasto, which means ‘head of the fretboard’) when you want an easy way to play a piece you already know in a different key. It’s much easier to clip a capo on the fretboard than it is to re-learn your song in a new key.

Check this page if you’re looking to purchase a capo or other ukulele accessories.

Why use a capo?

Some people think using a capo is lazy. Others think it is cheating. These folks would advise you to invest the time to learn your song in the new key. While this view makes sense, don’t throw away your capo yet!

Let’s say your favorite singer asks you to play with her in a different key at the very last minute….say just before you are about to go out on stage in front of hundreds of people. At that moment you will be very grateful to your trusty capo.

Using a finger to stop all four of the ukulele’s strings is called a barre chord.  Using your first finger as a barre across the strings has the same effect on string’s pitches as using a capo.

Barre chords are easier to learn on ukulele than they are on guitar because the ukulele’s neck is smaller than the guitar’s. But simply clamping a capo across the strings is even easier than teaching your finger to stop all four strings.

How to Use a Ukulele Capo

One other thing to know about the music alphabet is that on the ukulele, any sharp could also be spelled as a flat of the next music letter. So,

Next, figure out where to put the capo

Standard ukulele tuning is called ‘C tuning’. Clamp the capo on the fret that matches the tuning (or key signature) you would like to play in. Then just play the chords or pitches from the key you know.

Below is a simple illustration of the tone (whole step) and semitone (half step) pattern in the key of C major in case anyone is wondering what is going on. 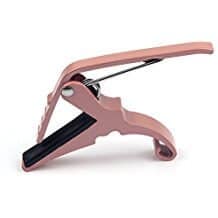 Here’s a blow by blow:

The ukulele is a small instrument so going higher than the 5th fret is not advisable.

Let’s say someone is singing a song in E and you need to accompany them on the ukulele but you know the song in C. Simple, just put the capo on the 4th fret and strum away, the same way you would if you were playing it open.

How do you know what key your song is in?  Usually the first and last chords of a song will be the same as the key the song is in. Not always, but usually.  When in doubt, experiment!

Other Ways to Use a Capo 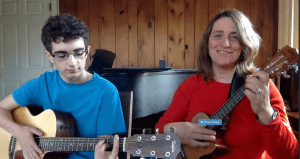 Another great use of the capo is to convert guitar chords to ukulele chords. You can do this by putting a capo on the fifth fret of the guitar. Now you can play your friend’s guitar using ukulele chords you know. Simply strum or pick the first four strings, which will be tuned to the same intervals as the ukulele. You can read more about this here.

A ukulele capo can also be used to convert a baritone ukulele to the standard ukulele tuning used for soprano, concert and tenor ukuleles.

Simply place the capo on the 5th fret of your bari ukulele to get the strings to match the tuning of a soprano ukulele.  Since there is a lot more music available for standard (soprano) tuned ukuleles this is a useful trick.

Here is a video of Jenny explaining how to do this.

Play along with a favorite recording

Finally you can use your capo is to help you play along with a favorite recording.

Let’s say the song is being played in E flat major but you only know the song in C.  Put your capo on the third fret and now you can play along without having to play a B flat chord!

(Buy 21 More Songs in 6 Days: Learn Intermediate Ukulele the Easy Way  to find out why songs in E flat have lots of B flat chords in them….) Unfortunately, it may take some trial and error to figure out what key the artist is using on the recording.

A ukulele capo is a very handy tool, especially for newbies. It can come to the rescue when you need to change the key of a piece and don’t have time to learn the song in a new key. And using a capo can help you to understand the relationship between chords and keys.

As you advance you may not need to use a capo as often to play in more difficult keys.  Try to learn as many chords as possible, so you can play in lots of different keys.  You’ll be a better ukulele player as a result.

Teaching Ukulele and Orchestra In School

Why is ukulele such a great instrument for schools?