The 12-bar blues or blues changes is one of the most prominent chord progressions in popular music. The blues progression has a distinctive form in lyrics, phrase, chord structure, and duration. In its basic form, it is predominantly based on the I-IV-V chords of a key.

12-BAR BLUES ON UKULELE IS A COMBINATION OF STYLES

The Blues uses both European and African musical elements. With its combination of European harmony and the African heritage of call and response, rhythmic complexity, and blues notes, the 12-bar blues gave the world a new form of music from America, a style of music that has revolutionized the world.

Most American popular music grew out of the 12-bar blues. The first rock songs (Johnny B. Goode, Rock Around the Clock, Ain’t Nothin’ But a Hound Dog) were blues songs. Try to pay attention to the chord changes. Once you learn the Blues changes, you have the skill to play all these songs! Check out our lesson videos below on Johnny B. Goode and Rock around the Clock.

The easiest version of the 12-bar blues on ukulele is the chord progression shown above. Each chord stamp stands for a measure of music. 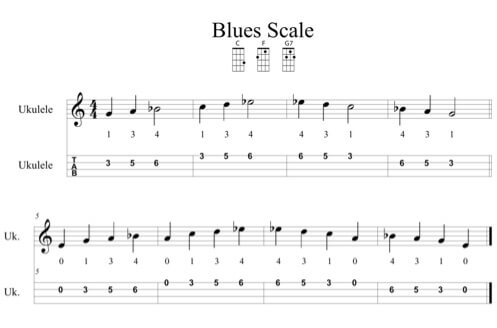 Musical improvisation means to make up music as you are playing. Songs that use the 12-bar blues often have a section where one musician makes up new melodies. The music above shows an example of the blues scale for ukulele.

Here’s a video to help you learn how to do some easy improvisation using the 12-bar blues on ukulele.

You may notice that there are flats in the music. Those flats are called blue notes.

This is a note or group of notes that are different than the notes used in Western folk music. Usually, in the blues, we play the different note near its next-door note so our ears can imagine the note that belongs on the African scale. In staff notation, a blue note will have a flat, sharp or natural in front of it.

ABOUT THE BLUES SCALE

The blues scale is a group of musical sounds that are spaced in the specific way that is used in blues music. The blues scale probably came with African people to the United States. In the key of C, which is the same as all the white keys on the piano, a blues note will be a flat or sharp next to a white key. When we add a black key to the white key scale, the music sounds different. The black key, for example, E flat, added in on top of the white key, such as E, gives the music a bluesy feel.

The added black keynotes are an attempt to approximate African scales. Western folk music tends to use 8 notes per octave, while African folk music tends to use 5 notes equally spaced per octave. Some of these African scale notes do not exist in Western musical instruments. For example, if you look at a piano keyboard, you can see that there ARE five black keys but the spaces between them are not equal. Thus, when you sing or play a flat note and somebody else is playing a regular note, your ear hears the sound the flat note and the regular note make together as bluesy.

Blues lyrics will often take on a recognizable form as well. Because there are three groups of four measures, the phrasing often works like this:

Anthropologists and ethnomusicologists believe that the blues grew out of African American work songs. A leader of a group of workers would call out to all the other workers, who would then sing a response. This form of music is called “call and response” and is common in a lot of African Music.

The 12-bar blues with its European harmony and African heritage of call and response, rhythmic complexity and blues notes offers a completely new form of music from America, a style of music that has revolutionized the world.

Songs in Minor Keys Fit the Mood of a Gloomy Day