Here is a ukulele tutorial for Chestnuts Roasting on an Open Fire (The Christmas Song). This song would be a great addition to the usual Christmas songs we have like “We Wish You a Merry Christmas” or “Silent Night” and “Jingle Bells.”

UKULELE TUTORIAL FOR CHESTNUTS ROASTING ON AN OPEN FIRE

Click to download the lead sheet for “The Christmas Song,” which is also known as “Chestnuts Roasting on an Open Fire”. 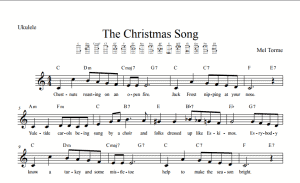 HISTORY OF THE SONG

It’s interesting to learn that the inspiration for “The Christmas Song” occurred during a scorching summer in 1945. You’d think that the season itself or related ideas to it would naturally inspire a song for a winter holiday. But according to the authors of the song, it just started as some scribbles on a spiral pad describing the coldness of winter as a way to cool off one summer day.

Bob Wells wrote a few lines about winter and Christmas. But he was not actually intending them for a song. So he left them lying on his piano. Mel Tormé found these writings, added music and more lyrics to it and voila! A meaningful holiday song was born. With its thoughtful lyrics and relaxed melody, it brings good cheer and Christmas spirit to “kids from one to ninety-two.”

Nat King Cole, with his guitarist Oscar Moore and bassist Johnny Miller, first recorded the song in June 1946. However, this version was not released until 1989. Their second recording of August 1946 included a String Choir. And this version was released in November as “The Christmas Song (Merry Christmas to You)”.

Various recordings of “Chestnuts Roasting on an Open Fire” have been released over the years. These includes performances from Bing Crosby, Frank Sinatra, Judy Garland, Barbra Streisand, Stevie Wonder, Bob Dylan, Justin Bieber, Paul McCartney and many, many others.