I Walk the Line Ukulele Tutorial

Since Johnny Cash recorded and performed I Walk the Line with key changes between verses, Jenny also presents I Walk the Line ukulele tutorial with three different keys: F, C and G. If you play the song in just one key, you will actually need just three chords. First of all, you’ll use the chords F, C7 and Bb for key of F. Also, you’ll need chords C, G7 and F for key of C. Finally, you’ll make use of chords G, D7 and C for the third key, key of G.

In case you want the sheet music showing all three keys, contact us and we’ll email you a copy. Moreover, you can join us here to receive ukulele music sheets every other week.

I WALK THE LINE UKULELE TUTORIAL

So, you can opt to play the song in one key only and complete the song with just three chords. Or you can play it like Johnny Cash and do the key changes for each verse complete with his signature hum which he admitted he does to get his pitch.

Let’s now proceed to Jenny’s easy I Walk the Line ukulele tutorial below:

Cash married his first wife, Vivian, in 1954 after being honorably discharged from military service. Although Cash did work on being a salesman while trying to start a career in music, he landed a recording contract with Sun Records. Subsequently, he released his first songs and went on tour. While on tour in 1956, Cash composed I Walk the Line which, in his own words, were his “pledge of devotion” to his wife. Seems like, the singer was trying to express his aspiration to stay true to his wife despite the temptations.

Unfortunately, Johnny and Vivian’s marriage ultimately led to divorce in part due to Johnny’s alleged infidelity and drug use. Johnny later married June Carter in 1968 who had been his wife until her death 35 years later. 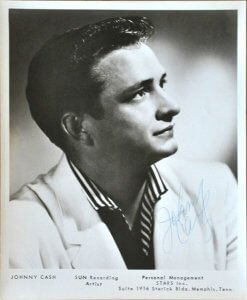 INFLUENCE OF THE SONG

Though it is remarkable that I Walk the Line reached number 1 on Billboard’s top country and western songs in 1956, it also crossed over to rank number 19 on the pop music charts. Over the years, several singers have covered the song including the Everly Brothers, Dolly Parton and Jaye P. Morgan. Even the rock band Live included a cover of the song on their 2004 greatest hits album. Finally, rock icon Bob Dylan himself thinks highly of the song, praising its “sharp words” sang in Cash’s “dark and booming voice” and backed by the right band.