Here’s a ukulele tutorial for “City of Stars”, the award-winning song from the movie La La Land. “City of Stars” is a wonderful song to play on the ukulele. It uses eight chords: Gm, C7, Dm, F, Am, Adim7, A7, Bb.

The strumming pattern for most of the song is down, down-up, down. For the part of the song that starts with “A look in somebody’s eyes…,” you can go all down strums.

Know more about the chords, strums and the ukulele tutorial for City of Stars in this video.

We also included a lead sheet for the song that you can download here.

The song was originally intended to be sung by Stone’s character Mia, but the director realized during the read-through that the song was a better fit for Gosling’s character Sebastian. So Sebastian performs “City of Stars” solo in one scene shot at the Hermosa Beach pier and later does a duet with Mia in their apartment.

Although La La Land’s soundtrack includes several enjoyable songs, the melancholic “City of Stars” is the song most associated with the movie. The song was nominated for many film and music awards for best song. It won prizes at the Golden Globes and the Academy Awards. 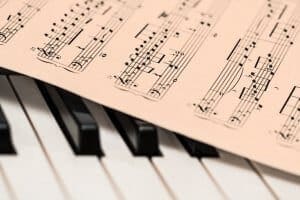 “La La Land,” which was released in 2016, was directed by Damien Chazelle. Chazelle is a young director whose best-known movie prior to “La La Land” was 2014’s “Whiplash.”

He worked with his friend and film composer Justin Hurwitz in making the musical score for the successful “Whiplash” and he enlisted Hurwitz’s help again with “La La Land”.

While Chazelle was working on the script of the movie, Hurwitz was busy with the music. Hurwitz worked on several demos and sent them to Chazelle for review until a melody ‘clicked’.

Hurwitz recounted that although “City of Stars” became the song that is most associated with the movie, it was actually one of the songs that took the least effort during the demo phase.

With the melody done, Chazelle and Hurwitz now needed lyrics. After going through a number of songwriters, they found another duo – Benj Pasek and Justin Paul.

Pasek and Paul provided lyrics which told a story that matches the hope and longing of the melody. They came up with the initial version of the lyrics in just a day – lyrics which Hurwitz and Chazelle found poetic and perfect.