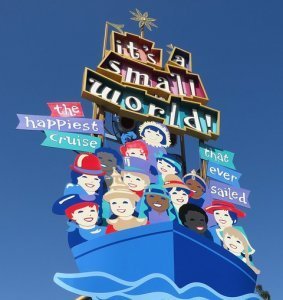 First of all, it’s easy to learn. You’ll need only four simple chords and all-down strums. Jenny does show another strumming pattern and a more difficult fingerpicking option if you’re up for the challenge. Otherwise, play with all-down strums and it’s still going to be great.

Secondly, “It’s a Small World” is a very popular tune just about everywhere. It’s the theme song for a Disneyland ride attraction of the same name. The dark attraction features hundreds of doll characters wearing costumes from different countries. And these characters are all singing along to “It’s a Small World”.  With five Disney parks showcasing the attraction in three continents, it’s no wonder the song has been played more than 50 million times.

For the chorus, Jenny does fingerpicking using the thumb, index and middle finger.

If you’re just beginning to learn the song, you can use all down strums throughout. Once you’ve got the hang of that, try the other strum pattern or fingerpicking.

So here’s the “It’s a Small World” ukulele tutorial before we proceed to some song history below.

The idea of Disney’s “It’s a Small World” attraction began in 1960. Robert Moses, a New York City public official known as the “master builder,” requested Walt Disney to contribute to the 1964 New York World Fair. One of Disney’s contributions, in partnership with Pepsi Cola, was an attraction for the UNICEF pavilion. Disney initially called the attraction “Children of the World”. He planned to have the doll characters sing the different national anthems around the world. However, this caused some clashing sounds so he decided to use only one song instead. He asked the Sherman Brothers to compose a new song that conveyed the theme of the attraction. He also wanted the song to appeal to different countries and “be able to be translated into many languages.”

Robert and Richard Sherman went to work and came up with the song “It’s a Small World”. Disney liked the song. However, he did ask the brothers to change the original ballad version to a more up-tempo one.

The song’s message of peace and tolerance fit so well with the attraction’s theme that  Disney renamed the attraction to “It’s a Small World!”

I Walk the Line Ukulele Tutorial