King of the Road Ukulele Tutorial

LYRICS AND CHORDS SHEET FOR KING OF THE ROAD UKULELE TUTORIAL

Before we advance to the new King of the Road ukulele tutorial, let’s get a copy of the lyrics and chord sheet here. King of the Road is a memorable and popular country song that is great to put on repeat and sing along to so we hope you get to learn to play it on the ukulele. 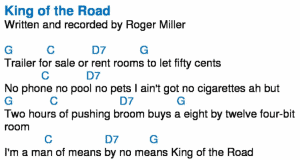 KING OF THE ROAD UKULELE TUTORIAL

In the following King of the Road ukulele tutorial, Jenny illustrates the chords and strums. While the song uses three very easy chords: G, C and D7; the strum pattern is a bit tricky. The strum pattern follows an uneven down (1), down-up (2), up (3) down-up (4) flow. The song is also a bit fast which adds to the strumming challenge but keep working on it and you’ll surely find the rhythm.

In addition, Jenny adds a bit of a chunk to the strum to make it sound more cool. She also varies the strum pattern when it goes to the bridge of the song (the part where the line goes “I know every engineer on every train…); she does an all down-up pattern with a chunk that gives a sound similar to that of a train. Check out the video to see how Jenny does the chunking.

King of the Road is a chart-topping country to pop crossover song. American musician and Country Music Hall of Fame inductee Roger Dean Miller wrote the lyrics of the song in 1964. According to Miller, a signpost that read, “Trailers for sale or rent” inspired her to compose the song. The signpost’s words eventually became the first line of the song.

Roger Miller’s popular song tells the story of a migrant worker who does not have much money or possessions but humbly loves his vagabond life. The man in the song is a hobo who rides trains and such to find work or opportunities and hilariously crowns himself “king of the road”. 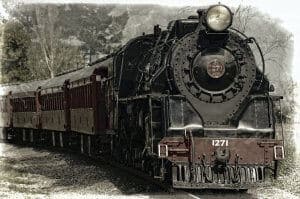 Miller’s King of the Road single was released in 1965 under Smash Records. The song reached number 1 in the 1965 U.S. Billboard’s Hot Country Singles list as well as the Billboard’s Easy Listening List. In the overall U.S. Billboard Hot 100 list, the song peaked at number 4. In the UK and Norway, King of the Road also reached number 1 in the Singles Charts.