Let’s start the Molly Malone ukulele tutorial by downloading the music sheets. You can download the lyrics and chords sheet and strum along with the video tutorial. Or get the tab sheet and play a solo melody.

We have the lyrics and chords sheet here. The lyrics to this famous Molly Malone song are interesting. These tell the story of a pretty girl who sells fish and seafood in Dublin from her wheelbarrow. 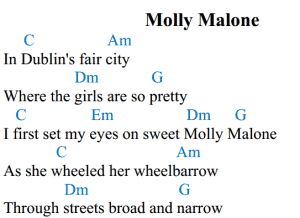 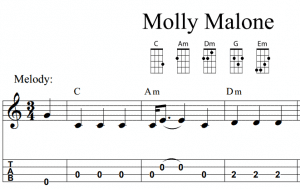 Get ready to play another easy ukulele song with our Molly Malone ukulele tutorial. Strumming pattern for the verses is easy with an all-down flow. For the chorus, Jenny does a fingerpicking style which you can follow on the video. Jenny also plays part of the song as solo melody. You have tab sheet and of course the Molly Malone ukulele tutorial video. So you’ll be able to learn a solo melody for this folk tune too. For the chords, the song uses just five: C, A minor, D minor, G and E minor.

Although Molly Malone is mostly recognized as an Irish folk song, there is no definite evidence that it is of Irish origin. According to the song, Molly Malone was a fishmonger, just like her mother and father before her. She sold her yield of raw “cockles and mussels” from a wheelbarrow. She carted the wheelbarrow through the “broad and narrow” streets of Dublin. The last verse of the song reveals the young girl Molly died of fever but her ghost and cart lingered to haunt the city.

The Molly Malone song, sometimes also referred to as Cockles and Mussels, is also considered as the unofficial anthem of Dublin. In 1988, the Jury’s Hotel Group presented a bronze statue portraying the mysterious Molly Malone to the city of Dublin. The chairman of the Dublin City Council at that time, Ben Briscoe,  unveiled the statue in one of Dublin’s principal streets, Grafton Street, during the 1988 Millennium celebrations.

There is one widely spread claim that a real person named Mary Malone lived in the 17th century. She died on June 13, 1699. Considering this, the Dublin Millennium Commission declared June 13 as Molly Malone Day.  Mary is a known derivation of the name Molly. 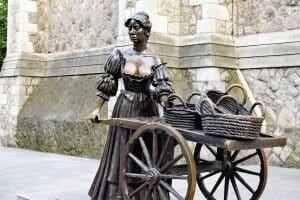 Jeanne Rynhart sculpted the famous statue which shows Molly in a revealing, low-cut dress considered as the norm in the 17th century. The statue is visited by many tourists and is one of the most familiar monuments in Dublin. From its original place in Grafton Street, the city moved the statue to Suffolk Street in 2014 temporarily while expansion of the Luas rail system was underway.

“Molly Malone” is one of the songs in our book 21 Easy Ukulele Folk Songs!

The Dubliners made this song famous. Here is a video of them singing this song.