Ukulele Tutorial for My Favorite Things from The Sound of Music

Let’s play along to this easy ukulele tutorial for “My Favorite Things” from the musical and film “The Sound of Music”! 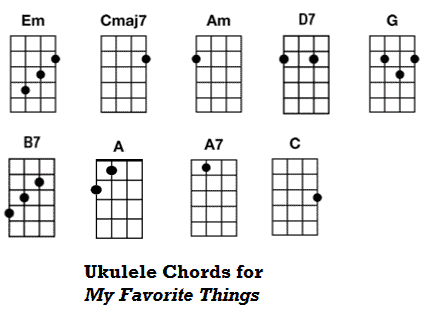 Visit our blog page to check more ukulele videos and tutorials for many other easy ukulele songs.

Most importantly, subscribe here to get our weekly emails. You’ll get free sheet music and a new video lesson in your inbox each week, plus three free songs when you subscribe.

Normally, the B7 chord is made by using a barre on the second fret and pressing your middle finger on the third fret of string 2. For this song, Jenny uses another version that is easier for a B7 to Em transition. If you compare the chord shapes for Em and the B7 chord barre version, you’ll see how this progression can make changing chords challenging.

There’s another chord progression at the end that you’ll need to practice. This is the part when you need to change chords from G to C fast a couple of times.

As for the strumming pattern, Jenny follows a D-DU-D (D-down, U-up) repetition.

TUNE FROM THE SOUND OF MUSIC

20th Century Fox released a film adaptation of “The Sound of Music” in 1965 which held the highest-grossing film distinction from 1966 to 1971. In addition, both the musical and the film received numerous accolades including Tony Awards “Best Musical” and the Academy Awards “Best Picture”. 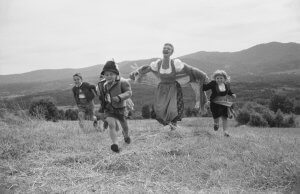 Mary Martin was the first actress to sing “My Favorite Things”. She played the female lead character Maria in the original musical production. Maria sings the song in a scene with Mother Abbess at the Nonnberg Abbey where she was a postulant. However, Julie Andrews, who acted as Maria in the film adaptation, sings the song in a scene with the children during a storm.

In addition to “My Favorite Things,” several songs from “The Sound of Music” became popular and are still performed today. Some examples are “Do-Re-Mi,” “So Long, Farewell,” and “Edelweiss.” Check out our ukulele tutorial for “Edelweiss” here.