As Time Goes By Ukulele Tutorial for Beginners

This week, we get to learn one of the best movie songs with the following As Time Goes By ukulele tutorial. As Time Goes By is an enduring and nostalgic song from the 1942 movie Casablanca.

Aside from this video tutorial on how to play As Time Goes By on the ukulele, we have made many easy ukulele tutorials that you can access from our blog page.

And of course, don’t forget to subscribe here to receive our weekly newsletters including free sheet music and video lessons. 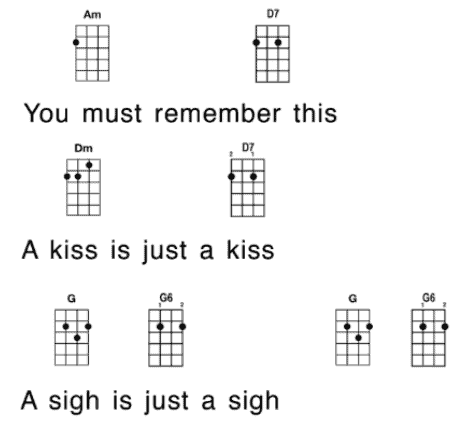 For this As Time Goes By ukulele tutorial, you’ll need to know or learn a lot of ukulele chord shapes – eleven in total. But the chord changes are pretty easy. Plus the strumming pattern is also easy, D-DU-UDU (D-down, U-up).

Some tips on how to make these chord shapes are given by Jenny on the video. For instance, you’ll need to lift just one finger in the G to G6 sequence. And you can leave out the Cm7 chord but it’s easy to learn if you want to include as you play along. Although G#dim, which is a four-finger chord, is a bit harder, the chord shape that precedes and follows it is D7. For the transition, you’ll just need to slide two fingers from one fret to the next. Then add or remove the additional two fingers.

With a lot of practice with this easy ukulele tutorial, you’ll be on your way to playing one of the best songs in American cinema.

As Time Goes By became very popular when it was featured in the Academy Award winning movie Casablanca. Cultural icons Humphrey Bogart and Ingrid Bergman played the lead characters Rick Blaine and Ilsa Lund. The character of Sam, a friend of Rick Blaine played by Dooley Wilson, sings As Time Goes By in one of the scenes. Max Steiner, who wrote the music for the film, based the whole score on As Time Goes By and La Marseillaise.

Although As Time Goes By is famous as the theme song of Casablanca, it was actually originally written many years earlier for a 1931 musical called Everybody’s Welcome. American composer Herman Hupfeld wrote both music and lyrics. Frances Williams performed the song in the musical and also recorded it. Other notable artists who recorded As Time Goes By after the show included Rudy Vallée and Jacques Renard. Vallée’s version charted at number 15 while Renard’s reached number 13.

It was not possible for Dooley Wilson to record As Time Goes By during the filming of Casablanca, because of a musicians’ strike against recording companies at that time. To take advantage of the film’s success, RCA Victor then reissued Vallée’s 1931 recording which topped Your Hit Parade in 1942 for four weeks. In the same manner, Brunswick Records also came out with Renard’s 1931 rendition which in turn charted at number 10.

Finally, the American Film Institute voted As Time Goes By number two on its list of the 20th century’s “top 100 songs in American cinema” released in 2004. By the way, the number one song on this list is Over the Rainbow from the 1939 movie The Wizard of Oz. Check out the ukulele tutorial for Over the Rainbow here. Happy strumming!

Love Me Do Ukulele Tutorial (with Melody Tab)