Learn how to play a gospel song  with this week’s Give Me That Old Time Religion easy ukulele tutorial!

In this video, you will see lyrics, chords, strumming pattern and melody tab on the screen.

If you visit our blog page, you will see our other videos and tutorials of easy ukulele songs. These contain the same information to help you easily learn how to play different easy songs on ukulele!

Sign up here to receive free sheet music and video lessons in your inbox every week.

GIVE ME THAT OLD TIME RELIGION EASY UKULELE TUTORIAL

In this tutorial, you will be using 3-9 chords. That’s because normally, as Jenny mentions, this song has 3 chords. But it really depends on what key(s) you use and whether you play the “turnaround”.

In this video, Jenny sings and plays in 2 keys to give you a choice of which one to use. And she’s also used a technique called a “turnaround” to connect these 2 keys. Finally, she also plays solo ukulele with such a beautiful melody!

For this song, here are the chords that you will use, depending on which key you choose. Ukulele chords for Give Me That Old Time Religion easy ukulele tutorial in the key of C are: C, F and G7. 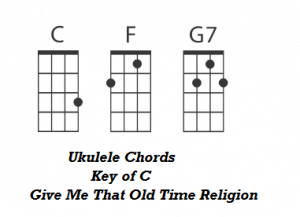 In the Key of F, you will then use these chords: F, C7 and Bb.  This second option is a bit tricky and you will find out why when you watch the video (specifically at 0:54). All in all, remember that these are both good keys to sing in! 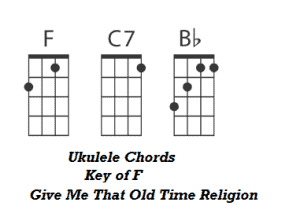 GIVE ME THAT OLD TIME RELIGION SHEET MUSIC AND LIVE LESSON

If you want the sheet music for the song, contact us and we’ll email it to you. Or subscribe here and receive weekly newsletters with our featured song video for the week. Most importantly, you’ll also get free downloadable sheet music in your inbox to go with the ukulele video tutorial.

Lastly, Jenny conducts ukulele lessons on Facebook Live every week and later this week, she will teach more on Give Me That Old Time Religion easy ukulele tutorial. So if you haven’t yet, follow us on Facebook. Schedule for the Facebook Live lesson and the sheet music for the song will be posted on the page as well.

Although this song has been sung with different melodies by various groups and artists, it originated as a traditional gospel song in the late 1800’s.

Charles Davis Tillman helped to make this song famous by jotting down the melody and lyrics when he heard the song being sung by field workers in 1873.

In the same year, the song then appeared in a list, together with other Jubilee songs. A Jubilee song is a religious song of African Americans usually referring to a time of future happiness. Give Me That Old Time Religion continues to be a well known and favorite hymn among Protestant churches and gospel singers

Due to the song’s versatility, many films have included it. For instance, “Inherit the World” used it as an opening song while the film “Sergeant York” had it as a background song.  The movie “Beneath the Valley of the Ultra-Vixens” has also featured this song as well as HBO’s “Carnivàle”.

Shall We Gather at the River Ukulele Tutorial