Because the song has only six chords and has fairly easy strumming pattern, beginners will be able to play and follow along comfortably.

Secondly, the strumming pattern is D-DU-UDU (D-down, U-up). When you’re first learning the song, you can do all down strums then switch to the more complex strum later on.

Finally, Jenny does a bit of fingerpicking arrangement in some parts of the song that you can also try. So let’s now head on to the video of Puff the Magic Dragon ukulele tutorial below:

Did you know that the song Puff the Magic Dragon is based on a poem, which was itself inspired by another poem? While studying at Cornell University, Peter Yarrow, who wrote the music for the song, found a poem on a piece of paper left on his typewriter.

It turns out that a friend, Leonard Lipton, came to Yarrow’s place after a visit from the library where he read poems by Ogden Nash. Inspired by Ogden Nash’s poems, particularly The Tale of Custard the Dragon, Lipton had ideas for a poem. To get the poem out of his head, he typed it on Yarrow’s typewriter. But he later forgot about it.

Years later, Yarrow revised some words on Lipton’s poem. He then used the poem as lyrics for a song in which he also wrote music for. Subsequently, Yarrow, with his group called Peter, Paul and Mary, recorded Puff the Magic Dragon. It was released it in 1963. The group included the song in their second album called Moving without much expectation. To their surprise, the song took off and climbed to number two on the Billboard Hot 100 list. Yarrow later found Lipton and provided him half the credit for writing the song.

And the rest they say is history.  The magic dragon Puff and his friend Jackie Paper became not only characters of a beloved song but also part of childhood tales. A television animated special released in 1978, followed by two sequels in 1979 and in 1982, featured Puff, Jackie and a land called Honalee.

In 2007, Eric Puybaret, with Yarrow and Lipton, published an illustrated book adapted from the song but with a clever happy ending. And according to some reports circulated in December 2016, Fox Animation is working on a movie based on the song. It is to be directed by Trolls director Mike Mitchell. 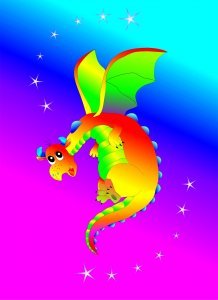 Of course, an article about the Puff the Magic Dragon song is not complete without addressing the long-time rumors about the song having disguised references to drugs or marijuana. Both writers, Yarrow and Linton, have frequently denied this rumor. Linton reiterates his poem was inspired by an Ogden Nash poem about a dragon and it “is really just a lot like Peter Pan”.

Yarrow and his group, for their part, claimed the song did not have hidden meanings. They viewed the song as an acknowledgment to the “the loss of childhood innocence”. While Jackie Paper and Puff had been inseparable, the end of the song alludes to Jackie’s discovery of other toys which led to “one grey night” when “Jackie Paper came no more.”

AND BACK TO PRACTICE…

Therefore, the song is not a bad influence for children but a great learning song. After that short break reading fun facts about the song, let’s head back to practice and strum along with Puff the Magic Dragon ukulele tutorial.

Jenny I Got Your Number Ukulele Cover