With Fourth of July just around the corner, we present a ukulele tutorial for “Yankee Doodle.” “Yankee Doodle” is an easy ukulele song that may sound nonsensical but actually has an interesting history as to how it became one of America’s favorite patriotic songs.

Let’s first proceed to the ukulele tutorial for “Yankee Doodle.” Jenny plays the song on the ukulele in two keys – key of G and key of C. With both keys – you only need three chords. For the key of G, you’ll need G, D7 and C. While for the key of C, you’ll need C, G7 and F. Jenny also illustrates fingerpicking for the melody on the last part of the tutorial.

How to Play Melody Tab for “Yankee Doodle”

We have received requests for Jenny to teach how to play the melody tab of “Yankee Doodle” so here’s a new video to grant these requests!

Don’t forget to download a lyrics and chords sheet of the song here so you can easily track the tutorial. 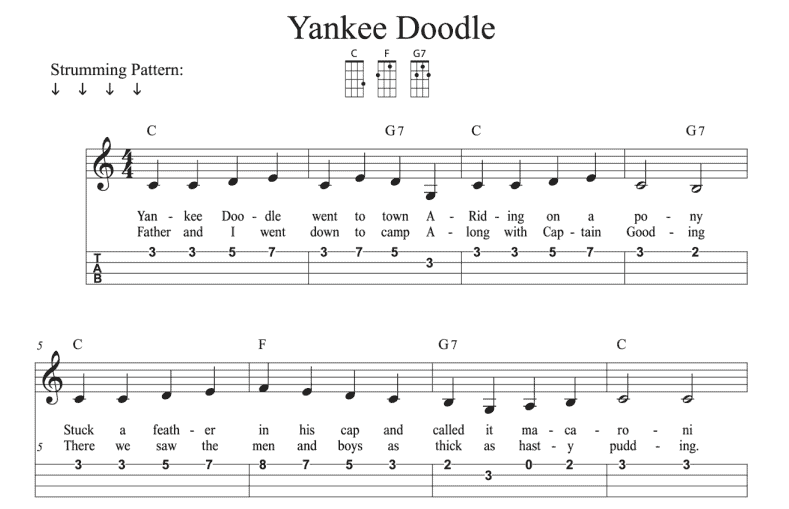 “Yankee Doodle” became famous during the American Revolution in 1775 to 1783. At that time, songs were already used not only for entertainment and worship but also as a medium for satire and parodies to tell funny or fascinating stories, to send a message to public figures or even to insult adversaries.

The opposing sides of the ongoing war traded insults through satirical songs. “Yankee Doodle” was one of these songs which British soldiers sang to get back at the American soldiers by calling them “Yankee Doodles.” Yankee was a disdainful word to describe a colonist and a doodle is fool or a simpleton. In addition, the song depicts the ‘Yankee Doodle’ as ridiculous, portrayed by a poorly dressed man riding a pony as opposed to a horse.

The American rebels though embraced the song and created other versions of it to return the insult to the British redcoats. With the Americans eventually winning the war, Yankee Doodle became their  favorite anthem. Instead of being received as an insult, the “Yankee Doodle” label brought pride to the Americans. On the other hand, it was difficult for the British to hear the song while marching to their surrender.

What the American soldiers did – embrace what was meant as insulting or disparaging and claim as their own – would later be known during modern times as reappropriation or reclamation. Nevertheless, the song “Yankee Doodle” has lived on to become one of the most well-known patriotic songs in America.

Have fun learning the song and happy Fourth of July!

Yankee Doodle is one of the songs in the first book of our book series: 21 Songs in 6 Days: Learn Ukulele the Easy Way!

How to Play Silver Bells – An Easy Ukulele Song for Christmas