Under the Sea Ukulele Tutorial for Beginners

UNDER THE SEA UKULELE TUTORIAL

For this Under the Sea ukulele tutorial, you’ll need the following ukulele chords: G, D7, C, Em, A7 and G7. Although you’ll need more chords than usual, the chords are not the difficult part in learning how to play “Under the Sea” on ukulele. The difficult part is more on the rhythm. The strumming pattern that Jenny uses is D-DU-UDU (D-down, U-up). If you hit a snag following the strumming pattern, you can learn it with this video tutorial.

Jenny will have a Facebook live session later this week to teach more on Under the Sea ukulele tutorial so don’t forget to like us on Facebook. Check for the schedule and sheet music which will be posted before the live session. In case you don’t make it to the live ukulele lesson, check the video recording on our Facebook page, under the videos section.

If you want lyrics and chords sheet for the song, contact us and we’ll email it to you. Or subscribe here and receive weekly newsletters about our featured song and other ukulele lessons. Most importantly, you also get sheet music for the week’s ukulele tutorial.

Alan Menken created the music for Under the Sea. He is a multi-awarded composer who worked on many Disney animated films. He also composed all other songs for the 1989 film The Little Mermaid. On the other hand, Howard Ashman, his frequent collaborator and acclaimed lyricist, wrote the lyrics for these songs. The Little Mermaid is the first Disney film of Menken and Ashman. But they have previously worked in a couple of musicals including the successful Little Shop of Horrors. 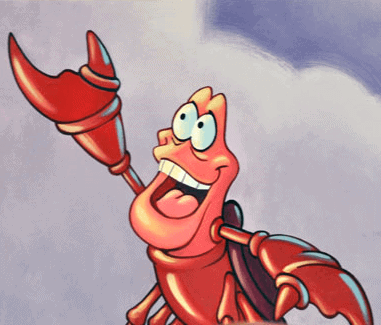 In the song Under the Sea, the crab Sebastian pleads with Ariel, the animated film’s lead character, to abandon her quest to become human. Sebastian talks about the hardships and perils of life “up on the shore” while comparing these to the sweet and untroubled life “under the sea.”

Did you know that the film’s creators developed the character of Sebastian specifically for the film? Hans Christian Andersen’s original story did not include such character. Also, the creators initially considered an English lobster named Clarence. However, Ashman suggested changing the character to a Jamaican crab named Sebastian which the filmmakers accepted. This would be why Under the Sea has a blend of Caribbean music – Jamaican reggae beat and Trinidad and Tobago’s calypso style.