Here’s our Autumn Leaves ukulele tutorial to help you learn this sentimental song just in time for the season. The song has several versions in different languages such as French, English, Hungarian and Japanese. Although the song features mostly jazz harmony, it has been played in various genres like country, rock, pop, disco and electronic music.

Being a jazz song, Autumn Leaves features several chords which may be a bit tricky for beginners. But it’s great too to take the challenge and learn a new song with different chords than what we’re familiar with. The chords are: Am, D7, Gmaj7, Cmaj7, F#m7b5, B7, Em, G6, A7 and C6. Jenny uses D-DU-UDU (D-down, U-up) strumming pattern.

Even though all those exotic chords look daunting, grab your ukulele and enjoy strumming along with Jenny’s Autumn Leaves ukulele tutorial below:

Jenny sings the English version of Autumn Leaves in the ukulele tutorial. But the original version of the song was French, Les Feuilles Mortes. Renowned Hungarian-French composer Joseph Kosma wrote the melancholic melody for a ballet act called Le Rendez-vous. Subsequently, Kosma revived it for a 1946 French film Les Portes de la Nuit. For the film, poet and screenwriter Jacques Prévert added the nostalgic lyrics of the song recalling “memories and regrets” about “fallen leaves” and “separated lovers”. 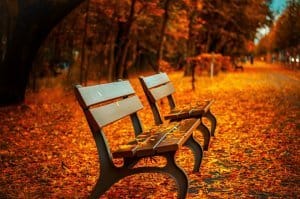 Though there is a literal English translation of Les Feuilles Mortes, singer and songwriter Johnny Mercer wrote new lyrics to the song. Accordingly, Mercer wrote the sorrowful lyrics, expressing the longing for a lover who is now gone, in just a few minutes. Mercer’s version is not a direct translation of Prévert’s French lyrics but it also depicts fallen leaves and wistful memories. In fact, Mercer’s lyrics were translated to a French version too. Mercer’s English version became very popular in the US and many famous singers have recorded it.

Roger Williams released a piano instrumental of Autumn Leaves that topped the Billboard pop chart in 1955. William’s recording remains to be the only chart-topping piano instrumental. Nat King Cole released his adaptation of Autumn Leaves also in 1955. Cole’s recording was used in a 1956 film also entitled Autumn Leaves. Erroll Garner also included a recording of the song in his best-selling album Concert by the Sea. Frank Sinatra, Miles Davis, Eric Clapton and Bob Dylan, to name a few, have all released their versions of this ultimately sad song about loss and death but which has remained popular throughout the years.