Ukulele Tutorial for In My Life by the Beatles

IN MY LIFE UKULELE TUTORIAL

While the original song by the Beatles released in 1965 is in key of A, Jenny transposed the song to key of C for two reasons. First of all, the chords are easier on this key. Also, this key fits Jenny’s voice better. So let’s get to the chords of song which are C, G, Am, C7, F, Fm, Dm, D7 and Bb. Although the chords Fm and Bb are a little complicated, Jenny shows how to play those chords in the video.

Next, let’s work on the strumming. The strumming for most of the song follows a D-UDU-DU (D-down, U-up) pattern. In addition, Jenny demonstrates a simplified version of how to play the instrumental solo sections in the song. The solo parts include the opening lick, the middle instrumental bridge and the closing part. Contact us if you want a copy of the sheet music which includes those solo melodies. Or subscribe here to receive ukulele music sheets every week.

Consequently, Jenny’s basic version of In My Life ukulele tutorial below is great for both beginner and skilled ukulele players:

There is some disagreement between Paul McCartney’s recollection of the songwriting process of In my Life compared with that of John Lennon’s. Lennon stated that McCartney’s contribution to the song was “the harmony and the middle eight.” In contrast, McCartney claimed that he wrote the whole melody of the song. McCartney added, “I find it very gratifying that out of everything we wrote, we only appear to disagree over two songs.” 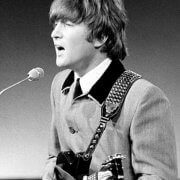 JOHN LENNON’S HIGH REGARD FOR THE SONG

Lennon considered In My Life as his “first real major piece of work” as he revealed in an interview in 1980. A remark from a journalist inspired Lennon to write the song. This was after the release of his 1964 book titled In His Own Write. The journalist questioned why Lennon so far has not written more personal things on his songs compared to those written on the book. Furthermore, Lennon cited another inspiration for writing the song and that was Bob Dylan. Although he and Dylan had not discussed about songwriting, Lennon accredited Dylan’s musical compositions as having helped him devote more literary effort to his lyrics.

FINAL LYRICS TO THE SONG

In striving to get more personal with his songs, Lennon started out to write the lyrics of In My Life in memory of a bus journey. The initial draft included references to several Liverpool sights and neighborhoods such as Penny Lane, Church Road, Childwall Abbey pub and the Docker’s Umbrella. While the final draft included the same opening lines of “There are places I remember…,” the specific landmarks have been replaced with more universal language.